Click Here to apply for the NCSD Pioneer Scholarship

After the passing of Libby Johnson, the possibility of establishing an NCSD Pioneer Scholarship was first considered. Early in 2008 – unfortunately at a time when all but one of the NCS pioneers had passed away – the first such scholarship was awarded. The scholarship was funded by NCSD. It is hoped that future awards will combine NCSD funds with contributions honoring the “pioneers” and other persons who have been our important NCS mentors and colleagues.

At the International Conference on Nuclear Criticality Safety (ICNC) in 1995, the following individuals were identified as being “Pioneers” in the industry, who made major contributions to our field: 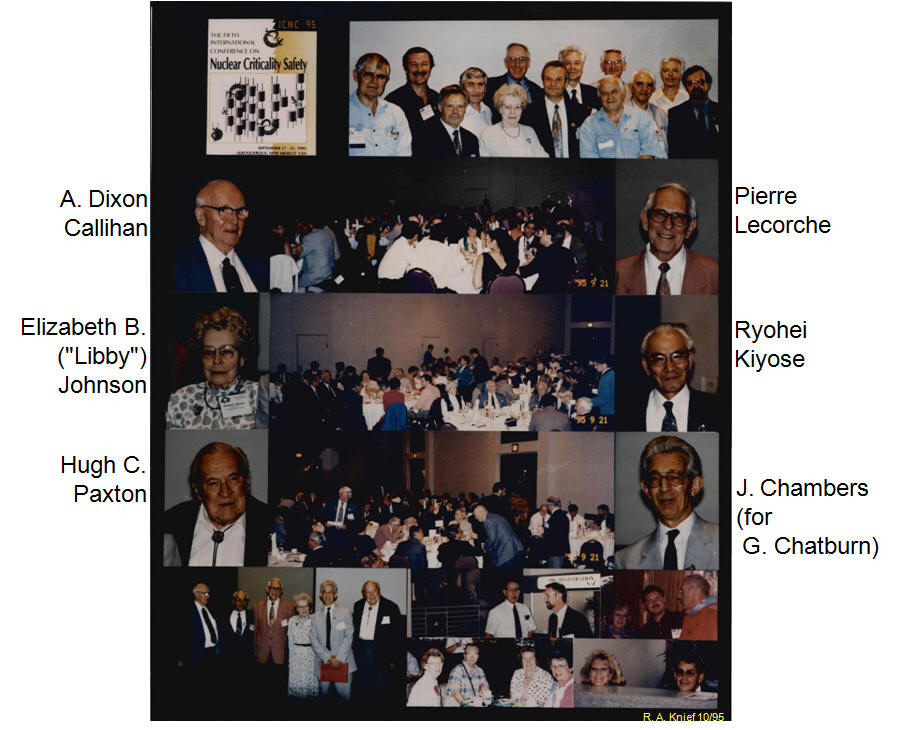 “I am grateful to the Nuclear Criticality Safety Division for being chosen as a recipient of the NCSD Pioneer Scholarship and the recognition of my previous work on the impact of ab initio reactor graphite cross sections to the criticality of the Transient Reactor Test Facility. This generous scholarship has allowed me to continue my studies with full dedication and has helped relieve some of the financial strain of graduate school. Through the support of the NCSD, I look forward to furthering my work in developing fundamental, physics-based cross sections and implementing these cross sections using novel techniques for multi-physics reactor calculations. These cross sections and modeling methods will then provide a solid basis for criticality safety calculations in new reactor designs.”

“The Nuclear Criticality Safety Division I can safely say is one of the most inviting and thoughtful groups within the American Nuclear society, and I am grateful they have chosen me for the Pioneers Scholarship.  Such a generous investment has given me increased financial peace of mind, which has given me the opportunity to further my understanding of nuclear engineering.  Specifically, it has allowed me to build upon my understanding of time-dependent neutron transport.   Such studies have gained attention again as the industry looks to improve our understanding of accident scenarios from first principles to improve the safety of our current fleet and develop improved reactor designs for the future.   I am delighted to be a part of such an effort and hope to add to the field of criticality safety by providing advanced computational tools for understanding how the neutron population evolves in time with unprecedented fidelity and speed.”

“The NCSD scholarship is such an honor to receive and has helped ease financial worries as I began graduate school. I had become interested in criticality safety after extensively exploring career options within the national labs during my summer internships. This interest in criticality safety helped me choose my graduate school adviser and research project so it is wonderful to receive the NCSD scholarship and know that the Nuclear Criticality Safety Division believes in my research project and my abilities as a future researcher. The scholarship is more than financial security because knowing that someone believes in you is motivating and increases self-confidence. The NCSD scholarship has allowed me to focus on my work at the PULSTAR reactor here at NCSU to develop new experimental devices that further increase the measurement accuracy of thermal neutron cross sections.”

I am thankful to the Nuclear Criticality Safety Division’s decision to award me with the NCSD Pioneer Scholarship.  The ability to pay off a portion of the loans from my undergraduate education helped to relieve the stress of entering graduate school.  This scholarship enabled me to better focus on my graduate work developing Monte Carlo methods targeted at multiphysics coupling with applications for modeling criticality safety problems.  Post-graduation, I have remained active in the NCSD community developing methods to compute sensitivities of eigenvalues, reaction rates, and kinetics parameters to geometric perturbations which can be used in conjunction with other sensitivity methods to conduct uncertainty quantification for criticality safety problems.

“I am am honored and am extremely thankful to the Nuclear Criticality Safety Division for selecting me as the 2013 recipient of the NCSD’s Pioneer Scholarship. Their investment and support will reflect well on the continuing development of nuclear criticality studies at the University of Florida. My first introduction to criticality science begun when I started working with Dr. Sedat Goluoglu. We have studied adjoint monte carlo simulation and it’s application to perturbation studies related to nuclear criticality analysis. In addition, I have been fortunate enough to participate in UF’s first “Introduction to Nuclear Criticality” course which was a great way to learn about what it is like to be criticality safety engineer at a facility. In addition to academic knowledge, the scholarship will also assist in the development a professional network of talented nuclear criticality scientists. I will be attending the NCSD Topical “Criticality Safety in the Modern Era: Raising the Bar” in late September. At this conference, I hope to learn more about the specific tools available for criticality analyses in addition to meeting criticality professionals from a variety of different backgrounds. I have enjoyed my time interacting with the NCSD, as they are supportive and knowledgeable group. I look forward to continuing my involvement in ANS and the NCSD as I learn more about the many facets associated with nuclear criticality science.”

C.J.’s research involves developing multi-physics models of criticality transient experiments, with attention to the changes in system properties (temperature, pressure, power, etc.) during an excursion, using COMSOL Multi-physics software. He also participated as an NCS intern at the Y-12 National Security Complex in the summer of 2011.

“The NCS Scholarship has greatly helped me in my pursuit of graduate research here at UT, as well as NCS opportunities outside of it. Criticality safety is a field I have found to be exciting and challenging since I first discovered it and the support of the Nuclear Criticality Safety Division has given me further encouragement to pursue a career in criticality safety. I am in the process of completing work for a graduate certificate in nuclear criticality safety and hope to pursue a career in the field after graduation with my master’s in May 2012.”

Jesse Holmes was awarded the NCS Pioneers Scholarship in 2010.  Jesse served in the Navy for ten years as a nuclear reactor operator and nuclear power instructor prior to attending college.  After leaving the Navy, he attended North Carolina State University (NCSU) and graduated in May 2010 with bachelor’s degrees in physics and nuclear engineering.

Jesse recently completed his master’s degree in Nuclear Engineering from NCSU in May 2011 with the research title, “Development of ENDF Thermal Neutron Scattering Libraries for Silicon Dioxide and MCNP Criticality Testing with an ICSBEP Benchmark.”  He is now pursuing a Ph.D. in nuclear engineering at NCSU and is collaborating with ORNL’s Nuclear Data and Criticality Safety Group in his research.  Jesse’s thesis topic is uncertainty quantification and sensitivity analysis of *ab initio *thermal neutron scattering cross section calculations. “My long interest in the field of nuclear engineering has culminated in a focus on uncertainty quantification and its impact on criticality safety.  My receipt of the NCS Pioneers Scholarship was an honor and a valued recognition of the work I have accomplished.  It is certainly a motivation for me to continue in the important field of criticality safety.”